Nothing can possibly go wrong… 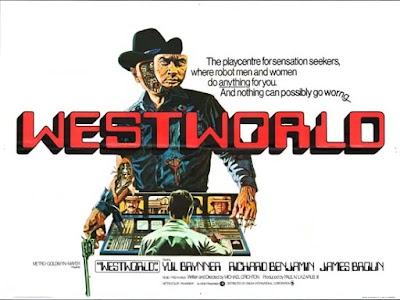 Primarily because Eugene and Ben did a Fusion Patrol podcast episode on it, and I want to listen to what they had to say about the film that Eugene described to me as “sex with robots”.

Well, there’s certainly some sex with robots. In 2017 this is maybe not as much a novelty as it was in 1973 (though the Stepford Wives was only 2 years behind). It’s only one scene, and I found I was a bit surprised when their spines didn’t light up a la Battlestar Gallactica reboot.

This Michael Crichton film is known for its great premise – a theme park, peopled by androids – where you can play out your fantasies. These are in three different ‘worlds’ one themed on the wild west, one in an medieval castle (albeit still with androids programmed with American accents) and one in ancient Rome (again, not peopled by latin speakers). Although there are female visitors, these probably correspond somewhat more with male fantasies. You can kill the androids, you can sleep with them. This is all probably even more frightening in 2017 when it’s so close to being realised, and it makes me curious to watch the latest TV adaptation. The dehumanising effect is chilling.

The actual plot (the androids go wrong) is full of holes, but I spent my time worrying about the logistics of multiple guests in this world. There’s a cursory attempt to make sense of this at the start (the guns are actually electronically regulated with heat sensors) but this soon evaporates. What about the swords in the medieval zone – what stops you injuring another guest with one of those? How can you not get hurt in a bar brawl as you get hit by a chair? Come to that, if there’s no body heat from the androids, how convincing are these contraptions at copulating?

And are the horses real or not? (Because how come they’re so reliable?)

There’s an attempt to have cake and eat it with the sci-fi premise allowing the use not only of the western setting, but every available cliche of the genre. Still Yul Brynner does good work as the inhuman gunman.