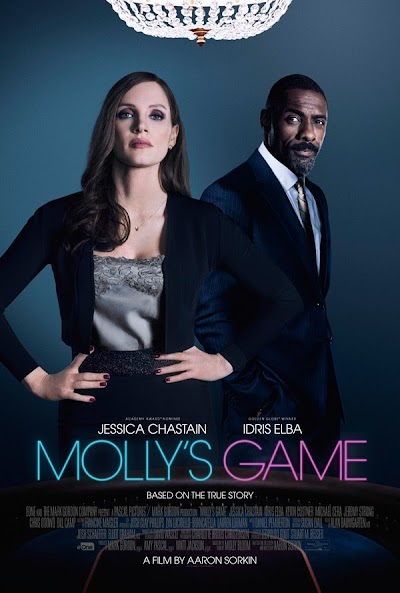 It’s written by Aaron Sorkin. That would have been enough, it’s also his directorial debut.

Also Jessica Chastain was the common element in those two excellent space exploration films Interstellar and The Martian (we don’t count Matt Damon because he’s in everything). I thought she was excellent but I’ve not seen her in anything else and I wanted to.

Exceeded. I’d say this is my favourite Sorkin since The West Wing.

Given how incredible The West Wing was it’s perhaps unsurprising I’ve been a little bit disappointed everything since then (although I haven’t seen Steve Jobs).

Sorkin fetishes intelligence, nothing wrong with that, but his characters are also invariably privileged and with it smug and arrogant. When they’re likeable it works well (in The West Wing there’s a positive balance between self-awareness and self-pity) and you can enjoy the best dialogue around. But I was prepared to feel guilty for dragging my friend to a dud… It got mixed reviews in the paper.

After a cracking high speed opening (literally – on a ski slope) in which Sorkin throws in some visual trickery accompanied by a voice over, to let us know we’re being told a story (it’s a true story, based on Molly Bloom’s own book) the film does take its time getting established. We zap back and forth between Molly’s childhood, olympic skiing career, setting up her poker game, and being on trial for illegal gambling.  Chastain is excellent, and so too is Idris Elba (from Ultraviolet). Kevin Costner, though, was amazing as Bloom’s father. I’ve not seen him in much (not – previously – a big fan) this was easily the best performance I’ve seen him give – it’s a small part, but pivotal, echoing some of that smart-and-powerful-but-flawed father stuff that Sorkin gave with such great effect to the late John Spenser.

The book itself features in the film; some of the narration (and dialogue) from the early part of Molly’s career is clearly intended to be taken from it, although the voice over sounds so much like Sorkin’s words I cannot believe any of it is verbatim. However I am curious to read the book, now, not only to see what is included (the film goes beyond to book to cover the trial) but also to experience Molly’s version of Molly as opposed to Sorkin’s.

Highly enjoyable. One to watch again.