I discovered last year there was a book group in the school I worked in, so I joined it and have enjoyed reading and discussing the books we’ve read. I decided I’m going to blog them too (and any others I read that are new to me). This is the first of our book club books: Still Alice, self-published by Lisa Genova in 2007. 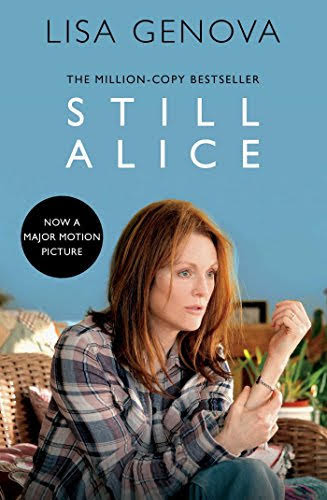 Told from the perspective of a woman suffering from Alzheimer’s makes this book unusual, perhaps unique. I know, from friends’ experience, how difficult it is to support someone with Alzheimer’s – but this is quite a different perspective.

For obvious reasons, it’s not in the first person, but the writing sticks rigidly (with one small exception near the end) to describing the thoughts and experiences of Professor Alice Howland, a Harvard psychologist specialising in linguistics.

The style is quite dry, and given the subject matter it almost reads as a case study rather than a novel. It’s certainly information heavy. But the perspective it gives is so fascinating that I find I don’t even care when plot twists (e.g. Alice’s daughter seeking IVF) are transparently there to illustrate the genetic risk factors. Despite the weightiness of the subject matter, and the seriousness with which Alice regards herself and her job, there’s the occasionally a wry observation to lighten the prose.

“William James Hall could never be mistaken for any of the stately, classically collegiate structures that adorned the prestigious Yard and housed the freshman dormitories and classes in mathematics, history, and English. It could, however, be mistaken for a parking garage.”

Alice is smart and articulate and this comes across strongly. Consequently her research into the disease is thorough and enlightening and conveyed with brilliant clarity. As the disease sets in Genova explores the shift in Alice’s focus – away from Harvard and towards her family and her shrinking world.

Alice’s priorities change and so does her relationship with her husband. Because of the direct focus on Alice we know little of his thoughts or feelings, but it is impossible not to get angry as the doctor advises Alice exercise will help her, but he forbids her to go out alone (after she gets lost) but also fails to keep appointments to run with her. He is undoubtedly suffering terribly seeing Alice’s mental state deteriorate, but we see what matters to Alice, and it’s the small things.

“She ate her last bite of cone. She wanted more sunny, seventy-degree days and ice-cream cones.”

There’s a plot thread that threatens to explore a moral conundrum around euthanasia and suicide, but this leads nowhere. Despite that, and despite some of the contrivances in the narrative used for educational purposes, it’s a fascinating read.

“I miss being sure of things. There’s no peace in being unsure of everything all the time.”

Our book club takes our individual scores to produce an overall average. I gave it 7/10.

A film was made in 2014. I’m not sure if I want to see it, it’s hard to imagine how a film could give the same perspective, although I think Julianne Moore is excellent casting as Alice.