I first started reading Sue Grafton’s ‘alphabet’ series (‘A is for Alibi’, ‘B is for Burglar’ etc) in my teens when I’d just started getting into American private eye books, a an enthusiasm inherited from my father and grandfather. I didn’t consider Grafton to be in my ‘top tier’ with the likes of Robert B. Parker, Sara Paretsky and Chandler himself, but having an appetite for more I read my way through quite a few of them. 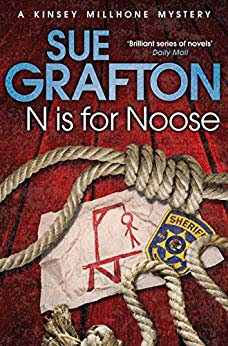 Recently I decided to reacquaint myself with her Private Eye, one Kinsey Millhone, in part thanks to the affectionate send-ups in Lawrence Block’s Bernie Rhoddenbar series (‘A is for Train’ etc.). Rhoddenbar is a delight, by the way.

As returned to the beginning, I thought I’d take a quick peek at how close Grafton was getting to the end of the alphabet. Sadly I found she is no longer with us, but she did get as far as ‘Y is for Yesterday‘. It’s a shame to have started on a series like this and despite getting so close to finishing it falling short, but maybe it’s a good thing the series is open ended, and we can imagine Kinsey’s investigations continuing…

I began again with A, which is was a serviceable start, but the series grows more impressive as Grafton begins to populate Santa Teresa (the fictional Californian town where Millhone lives and works) and to get under the skin of her protagonist, a prickly loner who gets more interesting as people try to get close to her.

“I’m not that good at relationships. Get close to someone and next thing you know, you’ve given them the power to wound, betray, irritate, abandon you, or bore you senseless. My general policy is to keep my distance, thus avoiding a lot of unruly emotion. In psychiatric circles, there are names for people like me.”

In some ways she’s quite cynical, although she is far from being misanthropic and takes an almost instant liking the people almost as frequently as she takes an instant dislike. But it tends to be on her terms.

“Lies are always easier because the only thing you risk is getting caught. Once you stoop to the truth, you’re screwed because if the other person isn’t buying, you’ve got nothing left to sell.”

The last book that I’d remembered reading was ‘J is for Judgement’ so by the time I got to ’N is for Noose’ it was well into the category of first time reads, and thus it is getting blogged here now.

Noose takes Millhone away from Santa Teresa for a large chunk of the novel, and out of her comfort zone too. Against her better judgement she takes a case recommended by a fellow PI who she has been living with, despite her rigid attachment to her own personal space since divorcing for a second time.

“Times like this, I longed for a husband or a dog, but I never could decide which would be more trouble in the long run. At least husbands don’t bark and tend to start off paper trained.”

The case takes her well out of her comfort zone too, in a small mountain community who don’t welcome her intrusion.

“It was the kind of scenery described as ‘breathtaking’ by those who are easily winded.”

One of the enjoyable things about Millhone is that she is not invincible like Spenser or Marlowe. She does have a limit, a point she won’t push herself beyond just to prove how tough or capable she is, and in this story she reaches it. All the same, I found myself missing Santa Teresa and the regulars whilst she was up in the mountains, and for that reason I didn’t enjoy it as quite as much as some of the preceding letters of the alphabet.