Sky’s Chernobyl was the best thing on TV last year, far ahead of most of the pack (Giri/Haji being a late contender – there was little else to match the quality of the year before). 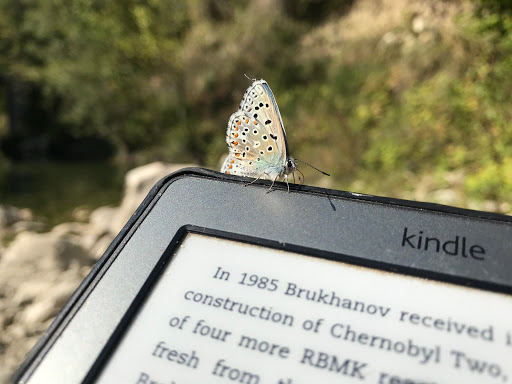 Chernobyl was a very effective dramatisation that rang true to what little I know of the infamous nuclear meltdown, but it left me wanting to know more – so what better holiday reading could I choose for my September jaunt to the South of France but an in depth account of disaster and everything that led up to it?

There are quite a few accounts of the Chernobyl meltdown. I selected Midnight in Chernobyl as it was fairly recent (published the previous year) and had received some good reviews.

It’s an excellent read. Not being limited to 5 hours of TV drama there’s a massively expanded cast of characters and far greater scope to expand on the political context in which the technological developments were implemented. Best of all it has lucid, intelligible descriptions of the physics of nuclear reaction, and the effects of radiation, which my 25 year old GCSE in physics didn’t encompass. It takes you from more or less first principles to a point where you feel that you can at least understand the potential appeal and shortcomings of an RBMK reactor.

The scale of the disaster of the meltdown itself, and the bureaucratic response to it, is well conveyed.

“In all, there were some 51,300 men, women, and children in Pripyat, of whom more than 4,000 were station operators and construction workers expected to remain behind to take care of essential services in the city and work at the power plant itself. To get all the families out safely would require more than a thousand buses plus two river vessels and three diesel trains, which would be directed to Yanov railway station and used to ship out the single men who filled the city’s dormitory complexes.“

The truth of some of the most memorable scenes from the TV drama is born out by the book’s account – but it also reveals omissions that might have undermined their dramatic impact – for example the incredible coolant system installed underneath reactor 4 by the miners was never actually needed. The truth, but not the whole truth.

All the same, in both accounts it’s the stories of so many people doing jobs that needed doing, and doing them at great personal risk that stay with me. Whilst the political manoeuvring took place, they just got on and did what they felt they had no choice but to do.

“The Sredmash specialists sought a volunteer from among the partizans, who agreed to be carried up on a separate crane and release the cables by hand. Before he embarked, they issued him three different dosimeters to record his exposure during the mission. It was an hour before he returned to the ground, where he was rewarded with 3,000 rubles, a case of vodka, and immediate demobilization. But he threw the dosimeters away, for fear of what they might tell him.”

It’s a complicated story, with a lot of technical and social context to grasp. But the depth of detail is set within a clear narrative, which encompasses a great many carefully described individual stories – and so despite bits of it being very tough to read, it was hard to put down. Highly recommended.