We read this for book group. The title promises something a rather dark, and it doesn’t disappoint. 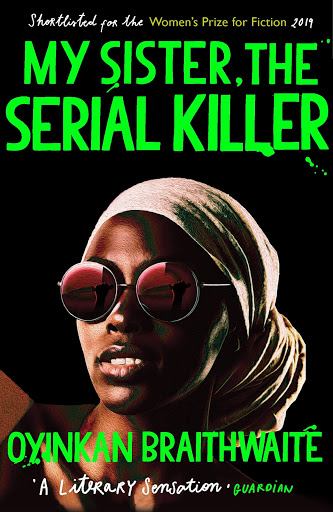 Told from the perspective of Korede, who is a capable nurse with many admirable qualities, and also a sister who is a psychopath, and with whom she has a deep sisterly bond, forged in childhood abuses. That doesn’t stop her resenting her sister (“she is made wholly of curves and I am composed only of hard edges”) as is common among siblings:

But Ayoola has a tendency to kill her boyfriends, and Korede is forced into an unwelcome complicity.

I considered therapy once, but Hollywood has revealed that therapists have a duty to break confidence if the life of the patient or someone else is at stake. I have a feeling that if I were to talk about Ayoola, that confidence would be broken in five minutes.

Worse, Ayoola takes a shine to the man Korede has her eye on, causing her to fear for his safety.

Braithwaite writes engagingly, with short chapters flipping back and forth between childhood and the present day. And for me it was also fascinating to get some insights into daily life in Nigeria (open police corruption, arguments about which country’s jollof rice is better). There’s a satisfying believable conclusion (even if the story itself is quite far fetched!) and it feels true to the characters.