This is one of those “walking the South West coast path” accounts. Having enjoyed Mark Wallington’s Five Hundred Mile Walkies (almost as much as Boogie Up the River) I wasn’t sure I needed to read another of these, but it was a book club choice – and thankfully so. 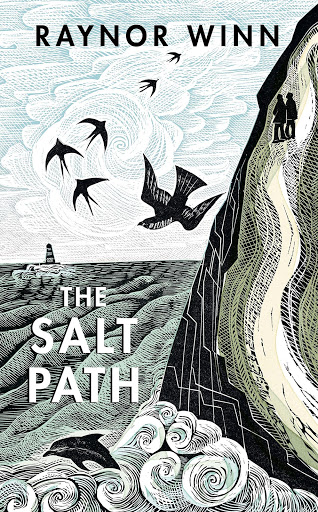 I was delighted to find within the first few pages that Raynor Winn’s walk (with her husband Moth) was inspired by the Boogie book. It is, however, a very different story. At the start of the book their home and business, built up over 30 years, is repossessed and Moth diagnosed with an incurable illness. The book doesn’t delve too deeply into the background to all this, but it does dwell on the sorrow (and self-pity) these unfortunate circumstances generate.

The phone rang as rain began to drop, heavy and determined. We sheltered under a rock overhang. It was Rowan, on her way to a late-summer job in Croatia but stuck in Venice. She thinks she’s missed the connecting bus. Before, when I was a parent, we’d have sent money to put her on a flight, make her safe. But now, just a helpless friend, I sheltered in a rock crevice, useless, hopeless, pointless, and talked to my daughter, stranded in a foreign country, alone.

Yet rather than wallow they’ve bought a tent and what little kit they can afford and set out on foot.

‘Do we have a plan?’
‘Course we do. We walk, until we stop walking, and maybe on the way we find some kind of future.’
‘That’s a good plan.’

The account, as well as describing some fantastic coastline, charts how their mood and mental state is affected by being constantly outdoors and itinerant. They walk slowly, their finances precarious and Moth’s health fragile. Throughout most of the book their future extends no further than the path.

Rather than the walk being a time to get our thoughts straight and make a plan, it had become a meditation, a mental void filled only with salt wind, dust and light. Each step had its own resonance, its moment of power or failure. That step, and the next and the next and the next, was the reason and the future. Each combe climbed out of was a victory, each day survived a reason to live through the next. Each lungful of salt scouring our memories, smoothing their edges, wearing them down.

Winn writes with an appealing honesty. I’m not sure how easy she’d be to get on with – she’s ferociously independent and reluctant to ask for help (as many of us are) and obviously incredibly strong-willed and single-minded. Although she isn’t especially reflective she is extremely uncompromising in reporting other people’s reaction to her. This is the kind of first-person writing I really enjoy.

I also, of course, enjoy places I’m familiar with such as the Minack Theatre (even if they only get a brief mention: “Seaton and Beer were gone in the flash of a 1950s’ time warp”).

The combination of the trek and struggle against adverse circumstances make this something of a page turner.

2 thoughts on ““The Salt Path” by Raynor Winn – Review”