Jonathan Coe’s Brexit novel is a sequel to The Rotters Club and Closed Circle, each of which were set in the Midlands a couple of decades apart. So besides taking the nation’s temperature we get to revisit some of the characters from the earlier novels. 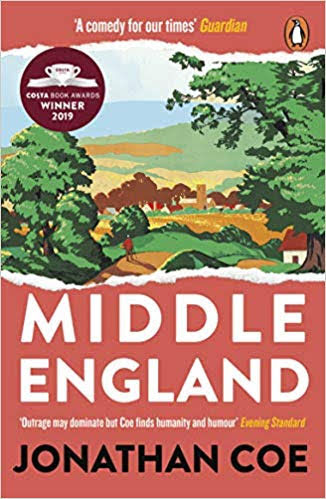 I had mixed feelings about this. I reread both of the earlier novels before tackling Middle England – despite the interval in their setting, they were only published 3 years apart and they ‘fit’ together very neatly. The earlier novel’s narrative is bookend by a storyline from the first sequel, which in turn ties up some of the storylines from the original, and so as The Closed Circle ends there’s a sense of completeness, of the story finished.

Despite this, I enjoyed revisiting these characters in Middle England and felt that the through-line gave a context and depth to the fault-lines being explored, as well exploiting some of the ongoing themes – such as Benjamin’s obsession with the Morecambe & Wise Christmas special as a moment of national unity which Coe wrote of a decade before the Olympics Opening Ceremony. The frantic phone calls which take place between the characters to urge each other to switch the TV is something I’m sure will resonate with all his readers.

“She assumed it was just going to be a whole lot of men in singlets and shorts walking around a race track for three hours while military music played and the Queen waved at people. ‘Even Danny Boyle can’t make that interesting,’ she said.”

But central theme, the defining national moment the novel taps into is, of course, the divisions stirred up during and after the 2016 advisory referendum on leaving the European Union.

“‘You have no idea, do you?’
‘No idea about what?’
‘About how angry it makes us feel, this air of moral superiority you lot project all the time –’”

Coe writes superbly about how the attitudes and prejudices revealed suddenly become impossible to ignore, however inconvenient this may be.

“…the unspeakable truth: that Sophie (and everyone like her) and Helena (and everyone like her) might be living cheek-by-jowl in the same country, but they also lived in different universes, and these universes were separated by a wall, infinitely high, impermeable, a wall built out of fear and suspicion and even – perhaps – a little bit of those most English of all qualities, shame and embarrassment.”

Of course this being Jonathan Coe it is also very funny (“his slender, whimsical sixth novel, A Curious Alignment of Artichokes“) with memorably and enjoyably idiosyncratic characters both old and new.

If I felt some disappointment at certain earlier resolved storylines being unresolved and yet at the same time, missing out on some characters (Claire) returning – this is the problem with sequels! – I did really appreciate the way in which the ending returned to the original duo who comprised the “Rotters’ Club”. Ultimately it’s a very effective sequel both in terms of the characters it revisits and in taking advantage of context established in the previous stories to explore the national schism over Brexit.