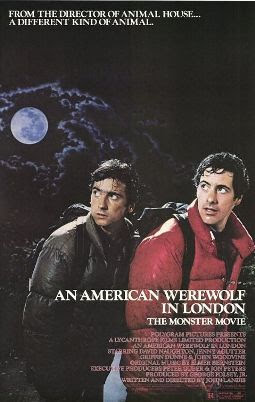 Because people always reference the pub scene where everyone goes quiet when the strangers enter.

I thought the title might be cleverly oblique but this is very much a Ronseal film. It’s about an werewolf in London. An American one.

The famous scene in the Slaughtered Lamb didn’t disappoint, although the England it belongs to is not too far from Avengersland. Indeed David Schofield is an alumnus of The New Avengers (Sleeper) and John Woodvine made four appearances in The Avengers (Square Root of Evil, Dead of Winter, The Murder Market and Look Stop Me). The pub wouldn’t feel out of place in Little Bazeley or Little Storping-in-the-Swuff.

A highlight is the very lovely Jenny Agutter who makes the most of what little she is given to work with.

The special effects are impressive and it’s clearly quite influential film – not least on Being Human which spins out the idea of examining myths in the context of modern life, without flinching at such things as the pain of transforming and folding back the allegory onto itself.

But although there are some great scenes, I didn’t feel the moment carried through. The pacing is uneven, and the limbo/suicide element to the werewolf mythology is odd. An interesting film, but not one I’ll rush to re-watch.