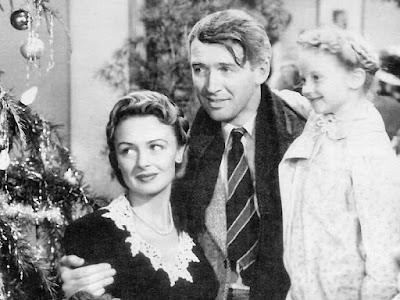 Here’s yet another cinema great that I have somehow never seen. Where I bought the DVD of Shawshank years ago, I bought It’s a Wonderful Life so much earlier my copy was on VHS. It was still in cellophane when the technology became obsolete.

My standard go-to Christmas film is Muppets Christmas Carol, which I consider to be a bit of a masterpiece as well as a surprisingly faithful adaptation of Dicken’s story. I wasn’t expecting to find many parallels in It’s a Wonderful Life, but it’s a sort of reversal of the story – it’s not the Scrooge character who undergoes a journey of discovery, but the genuinely good and dutiful George Bailey.

What is it with 1946 fantasy-dramas opening with starfields? Like A Matter of Life and Death we have a celestial beginning before we are plunged into the very tangible reality of some Earth-bound drama – but with Wonderful Life the fantasy element is then relegated to the role of framing device for the greater part of the film. It’s not until we reach the dramatic climax of Bailey’s struggle with doing the best for Bedford Falls that the fantasy reasserts – but then, despite the comic manner of Henry Travers apprentice angel, Stewart’s performance manages to raise the emotional intensity yet further.

Of course this is the part that is familiar, through all the pastiches and parodies (my favorite being Fry & Laurie’s Murdoch version, It’s a Soaraway Life). But it’s clear why it has had such an impact: it’s a powerful piece of film-making.

Although Bailey is clearly a man who behaves honorably in view of what he considers to be his duty, his passivity and self-pity are perhaps less than endearing qualities. In almost every respect I can see, Mary seems to be equally good-hearted, dutiful and committed as George, but never complains. I’m not sure that’s a genuine niggle – it’s the loss and regret George feels over being deprived of his youthful dreams that make his dedication to the Building and Loan seem so noble – and he still clearly loves his wife, his family and his friends even if it is tinged with some disappointment.

Besides, this film is just filled with beautifully written and played scenes that are full of wit, character and romance.

Ultimately this is likely to be a film I happily re-watch each Christmas from now on. Like Kane, it is a fully sketched portrait of a fictional life, but a life that is so much richer, a character that is so much more admirable, that though I cannot say with objectivity that it is a better film, I certainly found it hugely more uplifting viewing. While it’s a shame I’ve missed out all those chances to watch this at Christmas time, I’m looking forward to watching it again and again in years to come.

The only thing that’s bugging me is why Bailey’s non-existence should affect Mary’s eyesight.