As a Wodehouse aficionado I have read many of his books multiple times. But the man was so prolific that no matter how voraciously you read his stuff, it seems that there are always a few left that you haven’t got to yet. 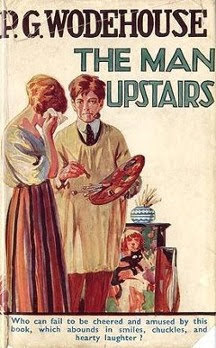 So that’s how come I’m reviewing a Wodehouse – for some reason I’d thought for ages I’d read The Man Upstairs but when I picked it up for a short story while I was deciding which novel to read next, I found it completely unfamiliar. It’s a collection of his rather early short stories (1914) but despite that they are generally extremely entertaining, and perhaps because of that it’s also a little more varied, with stories not just concerning golfers and writers, but footballers, insurance clerks and knights of the round table (“In those days almost anyone who was not a perfect bonehead could set up as a Wise Man and get away with it. All you had to do was to live in a forest and grow a white beard.”). There’s even a story that doesn’t feature the usual Wodehousian happy ending.

The stories are extremely well crafted, with the classic Wodehouse characters…

“Keggs was a man–one must use that word, though it seems grossly inadequate–of medium height, pigeon-toed at the base, bulgy half-way up, and bald at the apex.”

“He had the appearance of one who has searched for the leak in life’s gas-pipe with a lighted candle.”

I’ve been saving up the stories and eking them out over time, but despite it being a generous compilation – there are 19 of them – I have alas reach the end. But if you are a Wodehouse fan and you have also somehow missed out on this one, all I can say is, remedy that with all haste.