It feels to me like everything is getting worse. Brexit. Trump. Growing inequality, a resurgent right-wing. It didn’t used to be like this, it used to feel like the world was getting better. But then, I thought, maybe I’ve got to a certain age, and succumbed to Better-in-the-Old-Days-itis, the kind of thing I used to criticise bitterly. 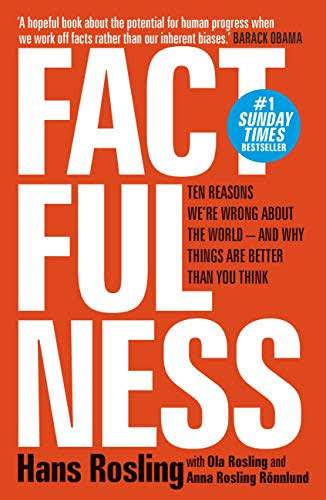 The subtitle of Factfulness is “Ten Reasons We’re Wrong About the World – and Why Things Are Better Than You Think”. A data-driven antidote to my anxiety was very appealing, and the book really doesn’t disappoint.

There’s no attempt to deny the bad things that are worrying me, but the emphasis is on the longer term trend (“things can be both bad and better”). It reminds me of that line in Obama’s farewell speech: “Yes, our progress has been uneven. The work of democracy has always been hard, contentious and sometimes bloody. For every two steps forward, it often feels we take one step back.”

Rosling identifies four different income levels that Rosling to avoid the outdated division between the “developed” and “developing” world and illustrate how fluid the status of countries can be, and how over a relatively short space of time a lot of nations (and people) have shifted up through the levels.

I will use the four levels throughout the rest of the book to explain all kinds of things, including elevators, drownings, sex, cookery, and rhinos.

I’m also relieved to discover my anxiety about the way things are going isn’t purely down to my ignorance – Rosling has tested all sorts of different groups, and the highly educated share many of the same misconceptions about progress that is outside their immediate field of specialism. Of course there are good reasons for that.

If we thought there might be a lion in the grass, it wasn’t sensible to do too much analysis. Those who stopped and carefully analyzed the probabilities are not our ancestors. We are the offspring of those who decided and acted quickly with insufficient information.

So to try to enable us to see the world more clearly, Rosling identifies 10 misconceptions, and every chapter is formatted to explain how we can be more factful in order to overcome each of them. Understanding the improvements in the world is essential to understanding what interventions are effective, and focusing on what matters. Rosling doesn’t argue there aren’t serious risks still to concern us, but it puts things in perspective:

This means challenging your worldview where the facts don’t fit, and where you have made mistakes, being curious rather than embarrassed:

It is quite exciting being curious, because it means you are always discovering something interesting.

Perhaps the most remarkable thing about this optimistic book is how much of it was prepared whilst Rosling himself knew he had only months to live. It is written with Ola Rosling and Anna Rosling Rönnlund who also completed the book (and who Rosling credits throughout but I didn’t quite fit in the title of this post). It’s such a light-hearted and positive read which is especially remarkable given the circumstances in which it was written – Rosling really was an inspiring man.