Pryce’s Aberystwyth Noir series (beginning with 2001’s Aberystwyth Mon Amour) is a wonderful treat for anyone who has any familiarity with Raymond Chandler (and his ilk) or Aberystwyth, or (like me) both – and I have reread them several times. The mean streets of his 1980s Aberystwyth (“the bars, the dives, the gambling dens, the 24-hour Whelk Stall, and Sospan’s ice-cream kiosk”) are rooted in the town’s geography so that even the enjoyable historical embellishments (e.g. the Patagonian War veterans) somehow evoke a real sense of time and place. 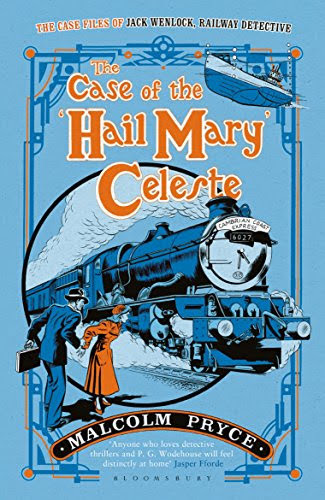 The Case of the ‘Hail Mary’ Celeste is the first novel to feature Jack Wenlock, railway detective. Having enjoyed the Aberystwyth series I’d have read this, but to a railway enthusiast the setting (the Great Western Railway on the eve of nationalisation in 1947) makes even more irresistible.

The elements I enjoyed from the Aberystwyth series are here – a complete world that represents a specific time and place and yet is somehow orthogonal to reality. There’s absurdity, the melancholy, vulnerability of the characters. There’s the Chandleresque rhythm and the colourful simile (“The sleet was dirty, like water from a miner’s bath”).

Again the story is told in first person by the detective, so it’s through the dialogue that we get to experience how people relate to Wenlock, for whom the railway is clearly more than just a vocation:

This is not necessarily advice that Wenlock heeds…

“Where would you like to go?’
‘Somewhere nice.’
I thought for a moment. ‘Have you seen the Severn Junction signal box?’”

As with the Aberystwyth series, I often had to turn to Wikipedia to sift Pryce’s factoids from reality. For example there’s a colourful account of one John Benge who was responsible for a track gang when the boat train carrying Charles Dickens was derailed.

“John Benge is regarded with particular disdain by literary scholars since it is because of him that we will now never know who killed Edwin Drood.”

This one is, in fact, only very slightly embroidered. There’s also a fictionalised encounter with the very real Dr Beeching (of the famous Beeching report which led to the closure of so many railway lines, but who back then would have been working at ICI).

There’s also the love interest (“‘He fell in love, for God’s sake. With a woman, instead of a train. He probably wasn’t the first.’”) who is delightfully prolific in slang:

“Jenny banged her head against the window glass. ‘Oh yes, everything will be just spoony if we have a cup of tea.’
‘Spoony?’
‘Snazzy Jack, super-solidly Fifth Avenue, groovy and totally cheezle-goddam-peezle.’”

Her collection of slang for jazz instruments and styles is a particular delight.

Besides the deep affection for the railway and what it represents, Pryce uses the setting to explore the changes in attitude, class and politics as exemplified by the decision to take the railway into public ownership. Wenlock, whose job is threatened, instinctively resists the change – even as he finds Jenny changing his life in other ways – but is forced to question the attitudes of those he has always deferred too, such as Lord Apsley:

“”You undermine the stout oak of a man’s heart with the woodworm of beastliness, facetiousness and the creed of Mr Marx.’ He paused as another thought struck him. ‘And poems that don’t rhyme.’”

The novel’s climax is at the moment of nationalisation (“It was midnight and all the trains in the country were sounding their whistles to salute or lament the passing of the four great railway companies and the creation of the new British Railways” – that’s one that I suspect is fictional as I can find no evidence of a mass tooting.) But happily it seems that this is not the end for Jack Wenlock as I have just found confirmation online that Pryce will be bringing out a sequel this year: The Corpse in the Garden of Perfect Brightness.