This is the first in a new series by Lee Goldberg about deputy Eve Ronin, a young homicide detective with the Los Angeles County Sheriff’s Department. 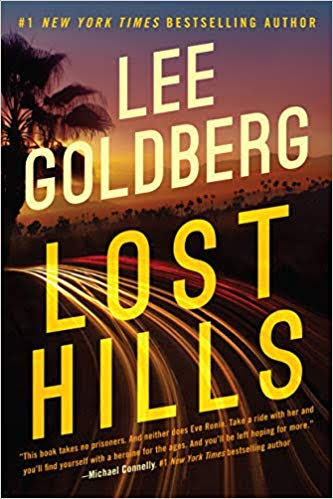 I first came across Goldberg when he co-wrote Pros and Cons with Janet Evanovich, which in turn I’d read because I enjoy Evanovich’s Stephanie Plum series so much (it’s so funny and colourful that I don’t mind that she writes the same book again and again because I always enjoy reading it). Pros and Cons was more forgettable, so I didn’t continue with the Fox and O’Hare series. I read Goldberg’s True Fiction first in the Ian Ludlow series which was ok but nothing special – I didn’t read any more. Goldberg has a long track record in writing television (including a number of Spenser: For Hire episodes) but I didn’t seem to be taken by his prose.

Lost Hills is not especially distinctive either, but it’s sharper and more convincing, and although there’s a certain cookie-cutter quality to Eve Ronin Goldberg is effective in conveying how impressive she actually is. Yes she has her place in the homicide division thanks to a Youtube video in which she unknowingly takes down a movie star and feels a need to demonstrate her capability (resented by the squad, driven by ambition etc. etc.) But she’s a highly capable detective for her age. She’s perceptive, and extremely quick witted. She’s inexperienced, she makes mistakes, but she learns quickly, which is refreshing.

The characters are well drawn, the plot is extremely well-crafted, and like Crais, Goldberg does a good job evoking LA. I intend to read the next Eve Ronin (Bone Canyon is due next year).