I was sure I’d seen a Guy Ritchie film before, that this wasn’t my first geezer-flick, but I just couldn’t remember. (Turns out it was Sherlock Holmes). So I wasn’t quite sure what to expect, but I’d certainly hoped for more. 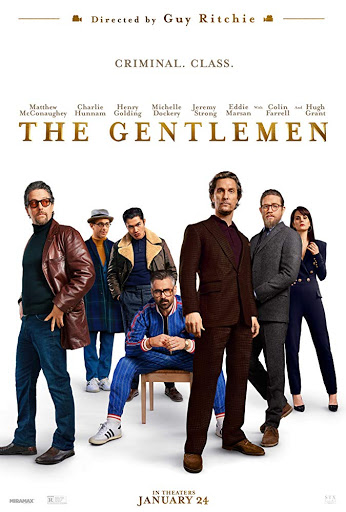 Ritchie clearly has a talent for telling a story in an eye-catching way. There’s something Tarantino-esque about his combination of language and imagery and the willingness to use alienation as a device to corral the audience. Unfortunately he doesn’t appear to have anything at all to say. He touches on class, culture, the ethics of journalism, loyalty and faithfulness and marriage and he appears to think all of them entirely unworthy of exploration. There’s a scene where Sam West is acting his socks off grieving over his daughter – montaged with burning out a lab where heroin has been produced. I think it’s meant to demonstrate that heroin is worse than cannabis, but if that’s all Ritchie has to say, it’s not much.

There’s no structure to the story – forget beginning middle and end, this could literally have stopped at any point without impairing the narrative. Nor is there any character development of any of the characters. Meanwhile, although it was the misogyny in his films I was warned about (and there is a gratuitous attempted rape) it was the casual racism and anti-semitism that stood out.

Hugh Grant, who always gives good value, does an entertaining turn as a tabloid journalist. But only Colin Farrell’s character had the capacity to sustain interest as he trod a careful line between observing honour among thieves while trying to train the excitable youths at his gym to fight well and stay out of trouble. If there’s anything to be salvaged from this movie, it’s going to be a spinoff called Coach.