Gentlemen, you can’t fight in here. This is the War Room. 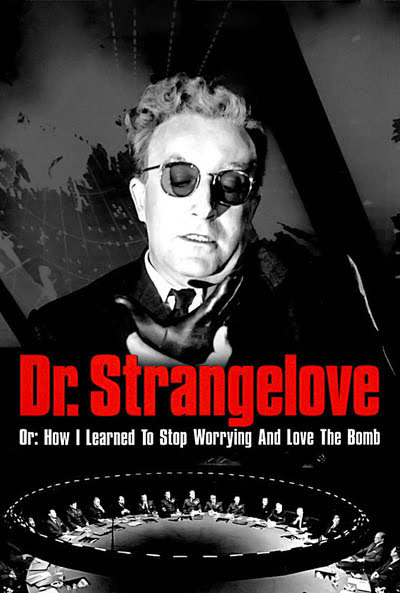 As a huge Goon Show fan I watched every Sellers film I could get my hands on in my teens – but somehow I kept missing Strangelove.

Kubrick turns his hand to quite different types of film with the same extraordinary craftsmanship – I used to dismiss certain genres, such as sci-fi or horror, until I saw 2001 and The Shining, which remain among my favourite films.

This is absolutely a Peter Sellers comedy. But as well as being very funny (there are lots of laugh out loud moments) it’s visually extraordinary. Comedy is often brightly lit with the emphasis on ensuring expressions and physical comedy can be seen clearly, and so they are here, but the lighting in the War Room creates breathtaking drama and atmosphere.

Sellers plays three roles (as he did five years earlier in the entertaining The Mouse That Roared). One of my favourite films is Kind Hearts and Coronets in which Alec Guinness plays a total of eight roles. There’s no doubt that the effect of such doubling, when not required, is more comedic than dramatic. However Lionel Mandrake, the honourable if dim RAF Group Captain is superbly characterised: absolutely beautifully played by Sellers – the most impressive of his three performances. His Strangelove is vintage zany Goonery. His President Muffley surprisingly sane (although maybe that surprise is chiefly due to the behaviour of the current US Commander in Chief).

It’s brilliantly written. The concept of safety through deterrent is mercilessly shredded. I don’t know how unlikely the codes falling into the hands of an unpredictable rogue might have been in 1964 (a tinfoil hat wearer convinced of “the international communist conspiracy to sap and impurify all of our precious bodily fluids” through fluoridation) but watching this just days after the President of the United States gave a press conference specifically to announce that he’s not off his nut is not a particularly relaxing experience.

There are model shots that are plainly model shots, and stock footage too, but Kubrick creates great effect focusing what is a global catastrophe down onto a couple of rooms and the fuselage of a B52, the few places where there are men who know what is about to befall the world. Laurie Johnson (composer for The Avengers from the introduction of Emma Peel onwards, the year after this) builds a score around his memorable ‘The Bomb Run’.

Sellers’ isn’t the only extraordinary turn (although he’s the only one to do three of them). George C. Scott and Sterling Hadyn, and Slim Pickens give huge but brilliant performances.