Spoilers. Big hairy spoilers ahead. So let me just say: if you haven’t watched Fugitive of the Judoon and you have managed to avoid hearing about it, go and watch it now before you come back and listen to our Fusion Patrol podcast episode or read my rambling speculations here… 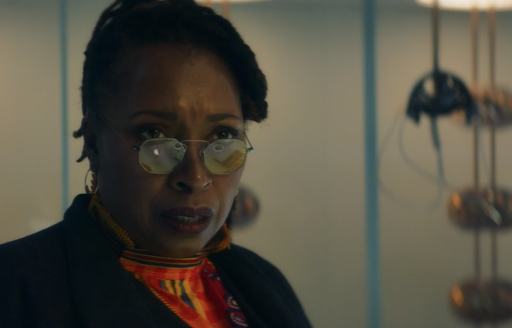 I wasn’t quite able to avoid all spoilers myself, but the instant I saw Captain Jack was back I dropped everything and tuned straight in, eager to see the fireworks as John Barrowman and Jodie Whittaker shared the screen… something I still hope to see (especially after Steven Moffat failed to deliver an RTD scripted River/Jack meeting, despite discussing it at a Death in Heaven preview I went to).

Listen to our Fusion Patrol podcast episode as we talk about whether this is Captain Jack’s only come back, argue over whether Jo Martin’s Doctor is a shallow cynical ploy or a long overdue innovation in multidoctoring, imagine who Lee Clayton might be, speculate about the Jo Martin Doctor’s relationship to The Movie, and discuss why in a story where the galaxy’s rozzers get star billing it takes so long for anyone to remember that one of the Doctor’s companions is also a police officer.

We record our podcast on Tuesday. That’s less than 48 hours to come up with crazy speculation about the Jo Martin Doctor – not enough to be exhaustive. Sure, it was pretty clear from the discover of her TARDIS that she’s not a Jackson Lake type Doctor. She’s a real Doctor – but is she a Michael Jayston type Doctor from the future, or a John Hurt type Doctor from the past but hitherto unrevealed? Or is she a David Warner type Doctor from an alternative timeline? (I even toyed with the idea that she might be a metatextual parallel incarnation of the Peter Cushing Doctor before I remembered that humans can’t regenerate…)

It also, briefly, occurred to me that it wasn’t Ruth’s Chameleon Arch, that it had been left there by the Doctor (before he became Jodie Whittaker) along with his TARDIS and the wrong person had opened it (i.e. smashed the glass). By the time she’s grabbed her new costume (it doesn’t look like anything we’ve seen the Doctor wear before) that seemed less likely. It would also mean Lee knew she wasn’t the Doctor (so who was he guarding?) and presumably that he sent the text message to deliberately mislead her – with the additional consequence that the Doctor is still wondering around somewhere on Earth thinking (s)he is human.

Since we recorded, I’ve seen some interesting fan theories. There’s a lot of speculation around the possibility that if she’s Hurt-like  from the Doctor’s past (the Whittaker Doctor’s lack of recollection notwithstanding) then her TARDIS, bearing some resemblance to the 1966/70 prop (probably from Twice Upon a Time) suggests she comes between Troughton and Pertwee, tying in with the ‘season 6B’ fan theory.

Question is: are they just reusing the Twice Upon a Time prop cause it’s what they’ve got, or deliberately because Doctor Ruth is between 2 & 3? #DoctorWho https://t.co/k7BfGsogVD

Since that theory was developed to explain where the Doctor Troughton portrays in The Two Doctors might fit in his timeline, and Troughton regenerating into Jo Martin at the end of War Games kind of blows that out of the water, I can’t see the milage myself (plus Troughton had the screwdriver from Fury from the Deep). Plus all 12 regenerations were accounted for by Time of the Doctor although it seems even that can be worked around if you try hard enough…

@Eddie_At_Skaro the Ed theory – Ruth is an alternative 3rd Doctor from 6B. 6B lasted a very very long time & The Doctor used all their original regenerations, were gifted another cycle regenerated twice more & was finally dumped on Earth in exile as Pertwee. Pertwee is 3 of……

The Morbius theory has it that Martin is pre-Hartnell, perhaps part of an entirely different regeneration cycle, explaining the earlier incarnations of the Doctor seen in Brain of Morbius. It’s nonsense, of course (her TARDIS is a police box, so she’s post An Unearthly Child) but it kind of resonates with the timeless child/everything-you-know-is-a-lie flapdoodle, so I can see why it’s attractive.

Personally I’d like to see more of the Jo Martin Doctor so the best option would be Jodie Whittaker will (eventually) regenerate into her (temporarily forgetting her rainbows and trousers that don’t reach phase). But if that’s too boringly straightforward, then how about her alternate timeline tying in with the David Bradley (and possibly Richard Hurndall) Doctor as part of an elaborate retcon to explain why neither of them are William Hartnell?