I’ve decided to blog new films this year as I see them. The first film I saw in January was 1917. 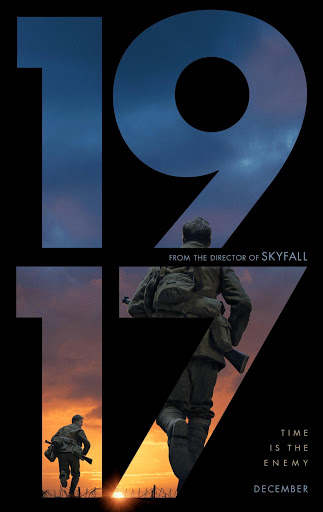 In war films like The Longest Day the moments when you get the sense of scale are when the camera pulls back and you see the hundreds of extras all at once, fighting, dying, running up the sand. 1917 manages to pull the trick of conveying an equivalent sense of scale while maintaining the sense of intimacy with its leads by shooting the whole thing as if it was a single shot. It’s not the first film to do this but it certainly isn’t using it as a gimmick – as we pan through hundreds or yards of trenches, every inch packed with bored soldiers smoking, sleeping, playing cards – it takes us through the filthy desolation of no-man’s land and then rapidly into the untouched French countryside – and demonstrates that this horror of unimaginable proportions is constrained to a tiny strip of land.

Not knowing how it was filmed, the first shot is so effective I wondered if the whole thing was actually one single shot (the only feature I have seen that does this is Victoria) but actually it pulls the Birdman trick of using digital effects to realise its aim. Nor is it quite real-time (like, say, High Noon) because it states early on that it’s a 6 hour mission and it has a running time of 2 hours. Some of this is accounted for by a period of unconsciousness, although in the second half I’m sure there’s some time compression.

The scale of the film is still extraordinary – as well as the thousands of extras, the hundreds and hundreds of metres of trenches. It’s hard to tell how the shelled out town is filmed – and how much of it is digital – but there certainly must have been a lot of impressive trickery – for example in shooting from both sides of the canal with its sole crossing point a broken bridge – it appears to be a single shot, and panning round reveals no visible crane.

All of this technical focus does little justice to what a masterpiece this portrait of the trenches of the Great War actually is – with its extraordinary young leads supported by some first rate actors (Firth, Scott, Strong, Cumberbatch, Scarborough etc.). It’s beautifully written, with whatever tiny victories can be snatched among the ongoing horror set against the ongoing daily folly and its huge cost in men’s lives.