This is by no means the first comical film about the holocaust, and it treads an uneasy line – I found myself questioning if the weak gags were sufficient justification for taking a humorous approach to this horror. 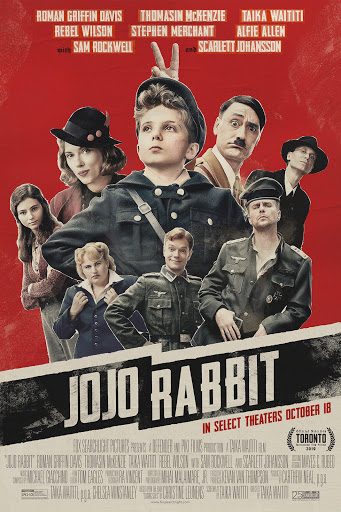 Some very minor spoilers follow. The titular Jojo is an 10 year old boy, desperate to do his bit for the Reich. For me the rewarding kernel of this film was the relationship between Scarlett Johansson’s resistance fighter this boy she gave birth to, and still loves completely, knowing that a child his age is easily led and safer if he is not deprogrammed. Although the film’s major focus is on the child’s perspective, it is the exchanges he never witnesses between his mother and the teenage Jewish girl she is hiding in her attic that I found most moving – as Johansson describes the terrible transformation of her child and her pressing need to believe it can be reversed.

“You don’t know him. He’s a fanatic. It took him three weeks to get over the fact that his grandfather was not blond. I know he’s in there somewhere. A little boy who loves to play, and he runs stupid because he’s scared of thunder, and thinks he invented chocolate cake. In the end that’s all you have. Hope.”

The ‘humorous’ elements were less rewarding for me. Whilst I will always enjoy Sam Rockwell doing Sam Rockwell (“Who am I, and why am I here, talking to a bunch of little titty-grabbers instead of leading my men into battle towards glorious death?”) I quickly found Taika Waititi’s juvenile Hitler tiresome. Not the concept of Hitler as an imaginary friend, which serves as an effective illustration and explanation of the appeal of the Nazi worldview to the young and impressionable. More the relentlessness of the slapstick, funny once or twice but scarcely developed through all the subsequent repetition. Waititi’s writing and direction is considerably more impressive – he really does have an extraordinary mind!

The performances of the children are noteworthy for their excellence. Thomasin McKenzie is superb and her performance is deeply moving, but even more remarkable is Roman Griffin Davis who has effectively to carry the film, appearing in most of the scenes. He’s thirteen, and he amazingly watchable in a challenging role (not to mention having to sustain the ‘Allo ‘Allo accent). He has an incredible range, and a presence, and like McKenzie, a truly impressive physicality, and I honestly couldn’t believe how close to the age of his character he is given how accomplished a performance he gave.