I read this one for my book group, although I’d have read it anyway – happily a friend had just leant it to me when we chose it! I enjoyed Philip Pullman’s His Dark Materials trilogy, so I was happy to return to Lyra’s world for this prequel, which is part one of a new trilogy. 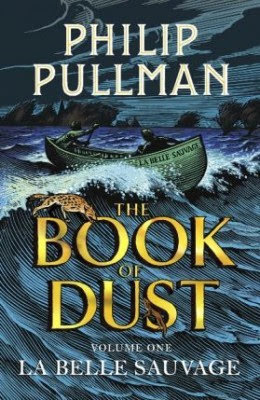 Lyra, at the point at which this book is written, is a small baby and so has relatively little agency, even though she is a key part of the story. This is broken up into two parts – the first of which set around Oxford, and sets everything up, and the second of which is more action adventure, involving as well as exciting natural phenomena some more fantastical elements.

I enjoyed the first half the most – the protagonist, Malcolm, is the son of a couple who run a riverside pub. Around the age Lyra was in Northern Lights, he’s far less of a hell-raiser, and besides helping his parents in the inn, he enjoys spending time with the nuns and a nearby convent. He is very much at home on the river, having his own canoe, La Belle Sauvage.

The Magesterium’s influence is in its ascendency at this point. There are echoes of Nazi Germany in the way groups are emerging who embrace the new totalitarianism, which feel frighteningly relevant in the world of Trump and Brexit too.

The second half belts along, and it’s a pleasure to be exploring once again the extraordinary in the rich universe Pullman has created, but it’s the political intrigue and the careful portrait of Malcolm’s young life under the creeping shadow of fascism that I found particularly memorable.

It’s an impressive prequel, especially given how high the bar was set by Northern Lights, and it certainly met my expectations. I gave it 8/10.