We read this for book club. Sal is a 13 year old survivalist nut. Anticipating that her mum’s boyfriend who has been abusing her will start on her sister, the two of them run away to live in the Scottish woods. 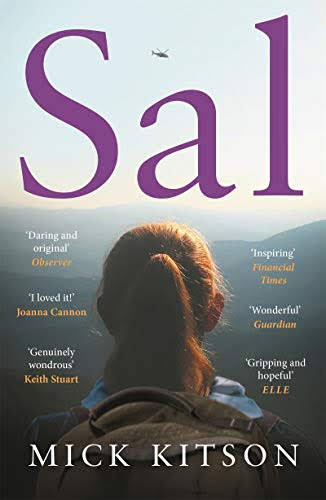 That sound fairly grim. And the book is unflinching in some ways. But told entirely in the first person by Sal, and using the language and the vocabulary of a 13 year old, it’s remarkably immersive. Sal is fierce and almost startlingly capable, but it gradually becomes clear that she’s quite unusual in the way she learns and thinks and applies herself.

“I am good at doing maths in my head and I know all the times tables so I can also divide and do fractions and percentages. I can shoot with an airgun and cast a fishing rod, but not a fly rod which uses a weighted line to get the fly out to the fish and I have never done that. I can read a map, do grid references, plot a course with a compass and work out elevations and gradients. I have killed one person, quite a lot of fish and, so far, two rabbits.”

After reading The Salt Path I felt acutely aware how inhospitable nature can be, and that was summer in Souther England. Surviving winter weather outdoors in Scotland is far more challenging – although Sal is vastly better prepared.

She’s in incredibly diligent about doing her homework and at the point at which the story picks up she’s fortunate in how well her plans have panned out, given they depend on book (or rather Youtube) learning rather than experience and practice. She has had to grow up rather fast, and take care of her sister Peppa, and she’s aware how close to the edge they are living.

“Most things are serious and you have to make plans and Peppa doesn’t understand that yet. She was too wee to remember a lot of things in the flat or I stopped her seeing them or being there when Maw was really bad or when Robert was there and hitting her and coming in my room at night.”

Swallows & Amazons it is not, nor The 39 Steps (despite our protagonist being sought by the police) but it is equally gripping and it features some very memorable characters – leading into some surprising narrative digressions. The story develops slowly but in several directions as it picks up pace and intensity – and the simple directness of Sal’s internal monologues keep it grounded even as it becomes more sensational.

It’s an exciting, thought-provoking and moving read. Highly recommended. I gave it 9/10.