“I adore its fiery taste.” 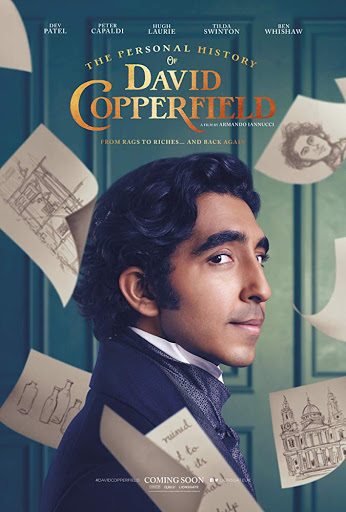 Armando Iannucci has an impressive track record in television, and I loved his Death of Stalin, so I was looking forward to The Personal History of David Copperfield, and I was not disappointed. Now I’ve not read David Copperfield so I had no mental image to mess up, nor had I any idea what an Iannucci costume drama – away from political satire – might be like. Turns his talent for realising absurd yet not just believable but recognisable characters is brilliantly suited to Dickens distinctive and entertaining dramatis personae. There’s some some lovely layering to the theme of storytelling, and a celebration of the foibles and idiosyncrasies of the people that Copperfield meets and quite literally starts to collect, such is his joy in their forms of expression and distinctive phrases.

Dev Patel as Copperfield is wonderful – he brings a sense of joy and fun as well as a keen sense of justice and compassion. He is surrounded by an impressive cast which includes Paul Whitehouse, Tilda Swinton and Hugh Laurie who is just outstanding. Perhaps is shouldn’t surprise me, as Laurie has always been brilliant and just seems to get better and better, but if I had to make any criticism of any aspect of the film, it would be the performances of the usually flawless Peter Capaldi and Ben Wishaw. Both were excellent by any usual standards – but both are actors who I’d pay the price of admission to see in almost anything, and by comparison to the rest of the cast, they were playing more with the Dickensian caricatures than the underlying motivation of the parts. Of course, they are both actors with whom I’m familiar – and perhaps more importantly, Mr Macawber and Uriah Heep are the breakout characters from the novel, giving them a somewhat tougher job to do. Their performances are never less than captivating anyway. Anna Maxwell Martin is, I think, the only actor to appear both in this and the brilliant bing-bang-bong TV adaptation of Bleak House 15 year ago.

Unsurprisingly, Iannucci brings out the comedy – perhaps more surprisingly he does so with great kindliness, revelling in the eccentricities and accentuating the humanity the people around Copperfield, albeit without shying away from calling out cruelty and dishonour where he finds it. There’s plenty of drama, too, and the film is well-structured and paced – not just beautifully films but with a strong sense of location as the action moves back and forth throughout Copperfield’s life. A highly satisfying watch.