With Bodies, his first novel, Mercurio returned to the subject of his superb TV drama Cardiac Arrest. 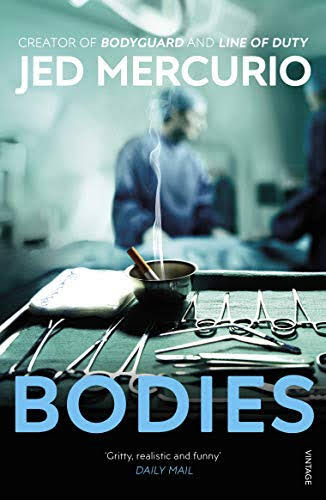 Published in 2002, this really is about whistle blowing. Reading this after Ascent – despite the radically different scope and setting – the trauma and ambition are if anything more powerful because of the detail and authenticity. Whilst the lead character isn’t always likeable, it is impossible not to empathise with the extraordinarily challenging circumstances he finds himself in, weighing real moral dilemmas in which consequentialist practicalities are serious consideration, and chipping away at a closed and defensive culture which rationalises self-interest and justifies camouflaging its mistakes.

It’s beautifully written, too, articulating both the desperation for human warmth and the gradual dehumanisation and disconnection with relationships and people outside the hospital, full as it is of bodies of one sort or another.

“We kiss in the cold still night with traffic Doppler-shifting by while through our mouths we pour heat into each other’s bodies.”

“It’s funny how, though they want you to be clever enough to train as a doctor, you’ve also got to be stupid enough to want to be one.”

I read it in part because it was subsequently adapted into another acclaimed TV series which is at time of writing available on iPlayer – yet I still haven’t got round to watching it six moths after reading the novel! Being somewhat squeamish, I didn’t find the book easy to read, and I’ve no doubt the television adaptation will be equally challenging for me – but the book is excellent and based on Mercurio’s track record I have high expectations of the TV series too.