We saw this on the strength of the trailer – and after the outstanding Giri/Haji I was in the mood for more Northeast Asian noir. Parasite then went and bagged the best film Oscar which is presumably why at 5.15 on a Wednesday for a foreign language film we didn’t, alas, have the cinema to ourselves. 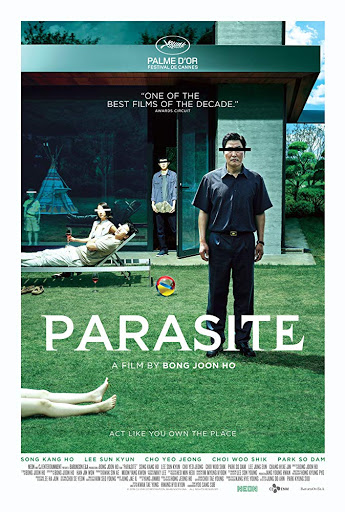 I’m not sure have given it the best pic gong – of the nominees I’ve seen, I’d certainly have said 1917 was a better film. That’s not to say Parasite is bad film – it isn’t – and it starts out very strongly with the son of an unemployed family gaining a foothold in service to a very affluent household. The opening, a hunt for a wifi signal, a powerful reminder of the poverty trap as they try to access a WhatsApp message that may contain a job opening.

The film takes a twist midway – just as it seems to be going more “cuckoo” than “parasite” but I found myself struggling to interpret the patterns within the somewhat random and sudden escalation of violence towards the end.

Whilst it’s hard not to feel some sympathy for the parasitic family, it’s equally hard to feel any admiration for most of them – the exception being the daughter Ki-jung whose confidence in her undeniable abilities reflects a cunning combined with an alluring unscrupulousness.

Show spoiler
I wondered why she was the one who didn’t survive. Was that supposed to be her just deserts for exceeding the capabilities of the rest of her family whilst being female?

If this gets anywhere near to being a neo-noir, then she is the nearest thing in the film to a femme fatale, even though she is not the one who is using her sexual allure (it’s her brother who takes advantage in that department).

Despite its flaws, it’s a compelling film (subtlety in satire is often over-rated, I think!) beautifully shot with some superb imagery, and well worth seeing even if there are better best picture nominees!